The 21st century sees many new retail mediums emerging almost every day thanks to the internet and e-commerce.  A new Pinterest ‘buy it’ button is the latest example that’s headed our way.

So, who uses Pinterest? Statistics by DMR show that 85% of Pinterest users are female, and approximately 72.8 million users can be found on Pinterest.   It’s interesting also to note that a pretty equal proportion of men and women shop online with an ABS survey from 2014 highlighting that over three quarters (76 per cent) of female internet users shopped online compared to 75 per cent of male internet users.

Just imagine scrolling through a website and seeing something that captures your eye.  Instead of seeking out a third party provider to find and purchase the product, Pinterest will soon allow you to purchase it with one click of a new blue ‘buy it’ button that will sit adjacent to the current ‘pin it’ button.  While this add on will initially be rolled out for iOS devices in the US, there’s no doubt it will be available on Android devices and in other countries in the near future.

As with any new development there’s no doubt there will be advantages and disadvantages.  To save you a bit of time we’ve put together some information for you that has been raised so far in discussions about Pinterest’s new marketing plans.

It has been announced that Pinterest is partnering with Shopify and Demandware. This will make it easier for small and medium-sized businesses to sell products via Pinterest.

A post on the Pinterest website revealed that some of the brands involved in this new feature include Macy’s, Neiman Marcus, Nordstrom, Cole Haan, Michaels, Poler Outdoor Stuff and SOBU.

The new button has opened up a whole new door for advertisers in search of new and exciting mediums.

When you think of the wide variety of pins that are currently on Pinterest you will be able to buy anything from ingredients for a recipe to that perfect pair of shoes.

However, it’s not all daisies and sunshine with this new Pinterest feature…

It may be hard for Pinterest to turn their audiences into customers because their website users were not originally customers. Changing social behaviour is a tricky concept.

Forbes Magazine believes the ‘buy it’ button won’t revolutionise shopping.  Could the failure of this button damage the reputation of Pinterest?

Some people may find this new feature annoying, which can reduce website traffic for Pinterest. The clutter of all the businesses advertising through this new medium may make it hard for products to actually get noticed with all the competition in one platform.

Will Pinterest’s new feature be a success or a failure in the future?

Does it provide more opportunities or threats? It will be interesting to see over the coming months how the new ‘buy it’ button is received by the online shopping marketplace. 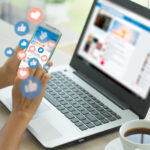